If, as I am, you are always hungry for new, quality Steampunk fiction, ready your plate for something new and toothsome.  The Sauder Diaries is an episodic tale being served for us online by newcomer, Michel R. Vaillancourt, at Scribd, at http://www.scribd.com/collections/2718398/The-Sauder-Diaries.
Currently at seven posted episodes since its commencement in mid-November of 2010, this tale is being released with impressive speed, and a darn good thing, because each one is eagerly anticipated.
Mr. Vaillancourt sets his story in an alternate world where the Crimean War has resulted in the development of advanced weaponry, such as the impressively-engineered HMAFS Bloody Rose, the airship on which the main character, Hans Sauder, finds himself after capture by notorious pirates.  Hans Sauder finds himself firmly persuaded to turn pirate (the alternative isn't shiny), and he joins the remarkably multinational crew (representing Scotland, Russia, Ethiopia, Norway, England, France, Spain, Arabia, and Slavic nations) of the Bloody Rose.

Each episode starts with an excerpt from Hans' diary, and is followed by a third-person narrative fleshing out the details of what actually occurred.  Each chapter is well-written and consistent, and Mr. Vaillancourt's tale is not marred by the plague of poor grammar and misspelling that taints much online and unprofessional fiction.
The characters are real, and are engagingly presented and developed throughout the story, which isn't as common as I'd like in the unpublished realm.  Included among the people you get to know is the upstanding and moral Hans (likeable for his foibles and yet occasionally making me yearn to smack him); the deliciously sardonic yet caring Doctor Koblinski, and two strong and quite different main female characters, Arietta the Chief Engineer, and Annika the Captain-Gunner.  These people are gritty, and most of all, REAL.
The Sauder Diaries pose a refreshing change from much of what I've found in this genre.  This isn't trite and fluffy fiction, nor is it a series of unrelieved battle scenes, or endless intricate descriptions of incomprehensible tech for tech's sake.  There are sufficient action scenes, realistic characters, entertaining scenarios, conflict, humour, cool steam tech (love the dual-gas-bag airship with the EMIPALE - Electro-Magnetic Inductive Polar Aerostat Lift Engine and tempting hints of things to come with Galvanotaurs, Chimera and Dragons), and a spice of sexual tension to offer something for most readers of both genders to sink their teeth into.

I'm not into spoilers (hate coming across 'em) so I admit I am not giving you lots of details of the story itself.  And, as it is episodic fiction, none of us knows what happens next until the author tells us.

So, in summary, good people, if you have been jonesing for some awesome steampunk fiction and wondering where the good writers are, go read the Sauder Diaries.  You can find it online at Scribd (link below).  But be warned - it's addictive, and episodic, and Michel Vaillancourt will keep you coming back for more.  Keep an eye out on this new author - I hope we see more.  In print. 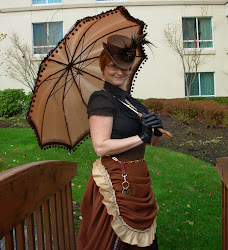